• To increase operational capacity for banks and supervisors to respond to Covid-19, the Committee will not collect Basel III monitoring data for the end-June 2020 reporting date

Today the Basel Committee published the results of its latest Basel III monitoring exercise, based on data as of 30 June 2019. The report sets out the impact of the Basel III framework that was initially agreed in 2010 as well as the effects of the Committee's December 2017 finalisation of the Basel III reforms and the finalisation of the market risk framework published in January 2019. Given the June 2019 reporting date, the results do not reflect the economic impact of the coronavirus disease (Covid-19) on participating banks. Nevertheless, the Committee believes that the information contained in the report will provide relevant stakeholders with a useful benchmark for analysis.

As recently agreed by the Group of Governors and Heads of Supervision, implementation of the final Basel III minimum requirements has been deferred to 1 January 2023, and they will be fully phased in by 1 January 2028. The average impact of the fully phased-in final Basel III framework on the Tier 1 minimum required capital (MRC) of Group 1 banks is lower (+2.5%) when compared with the 3.0% increase at end-December 2018 (see the "reduced estimation bias" part of the table below). For this calculation, for two G-SIBs that are outliers due to overly conservative assumptions under the revised market risk framework, zero change from the revised market risk framework has been assumed for the calculation of 30 June 2019 results. If these two banks are reflected with their conservative market risk numbers (see the "conservative estimation" part of the table), there is a 2.8% increase.

The capital shortfalls at the end-June 2019 reporting date are €16.6 billion for Group 1 banks at the target level with reduced estimation bias and €20.3 billion with conservative estimation, in comparison with €24.7 billion at end-December 2018. 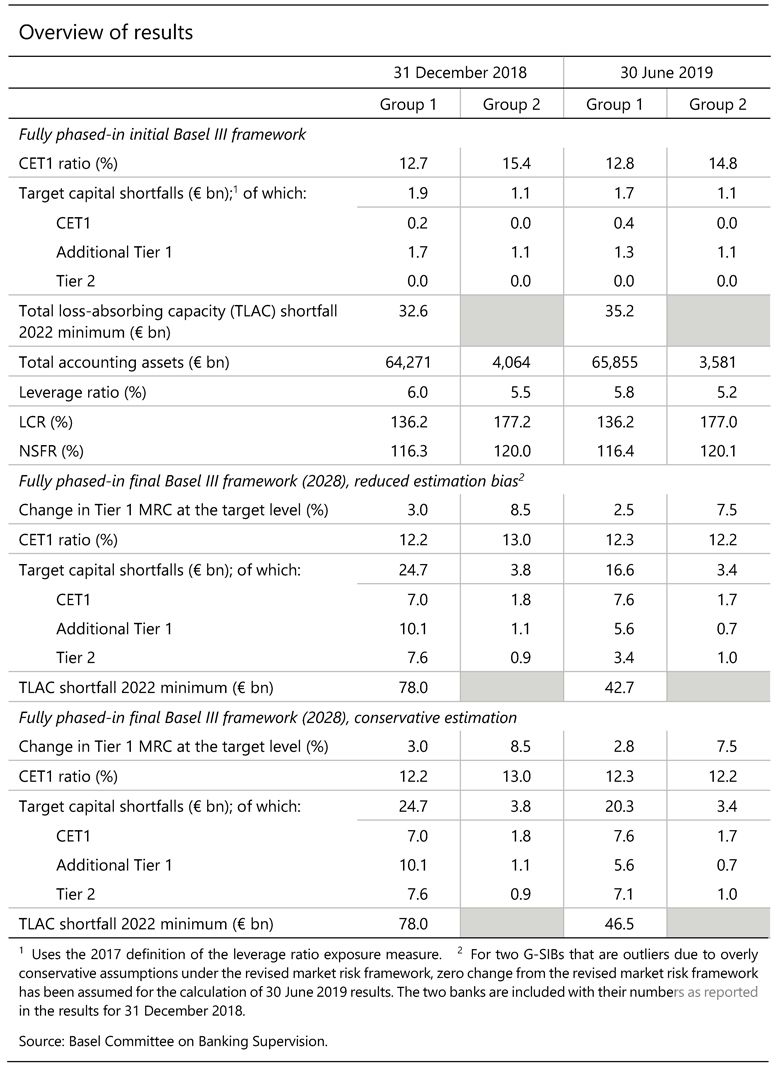 In order to provide additional operational capacity for banks and supervisors to respond to the immediate financial stability priorities resulting from the impact of Covid-19, the Committee decided not to collect Basel III monitoring data for the end-June 2020 reporting date and, therefore, not to publish a report in spring 2021. The Committee aims to publish the next Basel III monitoring report on end-December 2019 data in autumn 2020.